Former cycling world champion Thor Hushovd has come out to express his sentiments about his wonderful career and his decision to retire from the sport. 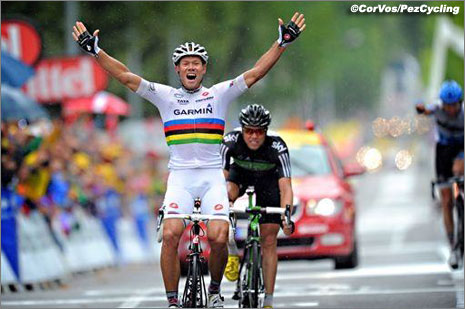 Hushovd had initially planned to go into retirement after the World Road Race Championship in Spain.

The cyclist had showed amazing form at the arctic race of Norway where he participated and came second on two stages, two and four. He had believed that he had a good chance at the upcoming world championship.

However, this was not meant to be as an injury dashed any plans he had of representing his country on last time. In a recent statement to journalist, Hushovd had commented about his retirement decision and expressed his opinion on his fluctuating form.

He explained that the time of his retirement where he had to hang his wheels was brought forward by a virus. While his was a tough decision for him, Hushovd is ready to move on.

In line with the original plan, he had two more years on the track. Granted, those two years would have been spent as a time of battling with some of the best riders the sport has ever seen as an ageing competitor. But it would have also been a time where he drew from the talent that has seen him bag so many wins in the sport.

Although it had ended before he even expected, his career was truly a glittering one. Looking back at his career, he admitted that he achieved a lot of his goals and is happy with his time on the wheels.

“I would say I’m proud, I can look back at my career with a big smile. I achieved a lot; I achieved more than I thought I would. Of course I didn’t achieve everything but there are not many who can do this also in such a hard sport.”

His time in the sport has not just been good for him alone; his supporters are satisfied with the sportsman too.